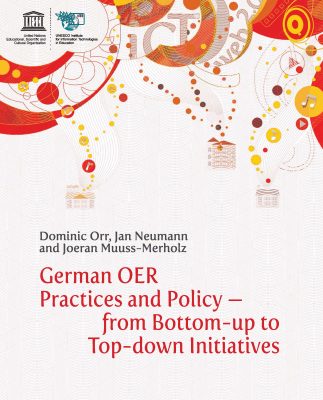 UNESCO Institute for Information Technologies in Education (UNESCO IITE) published the book on Open Educational Resources in Germany within its project on Open Educational Resources (OER) in non-English-speaking countries. The authors of the report – Dominic Orr, Jan Neumann and Joeran Muuss-Merholz – used holistic approach to explore diverse issues related to OER, including the policy perspective, as well as technical, legal, social and didactical aspects. The report provides a brief overview of the OER-related developments in Germany, describes the structure of the German education system and reveals major educational challenges. The state of advancement of OER in Germany is analyzed using bottom-up and top-down perspectives.

Though Germany could be characterized as a relatively latecomer to the OER scene, there is a strong OER community in the country: the OER World Map data for Germany shows 166 organisations involved in OER-related practices. Recent government activities in the field of OER include the OERinfo funding programme, which was launched in November 2016. There are some important initiatives at the level of federal entities, for example, the establishment of the Hamburg Open Online University, which is currently the most ambitious OER project in Germany. Considering the fact that for the German educational community and the authorities of different levels OER are recognized for their potential in fostering innovation, it is expected that the recent and forthcoming grassroots OER initiatives and those triggered by the authorities will favour the advancement of open education in Germany.