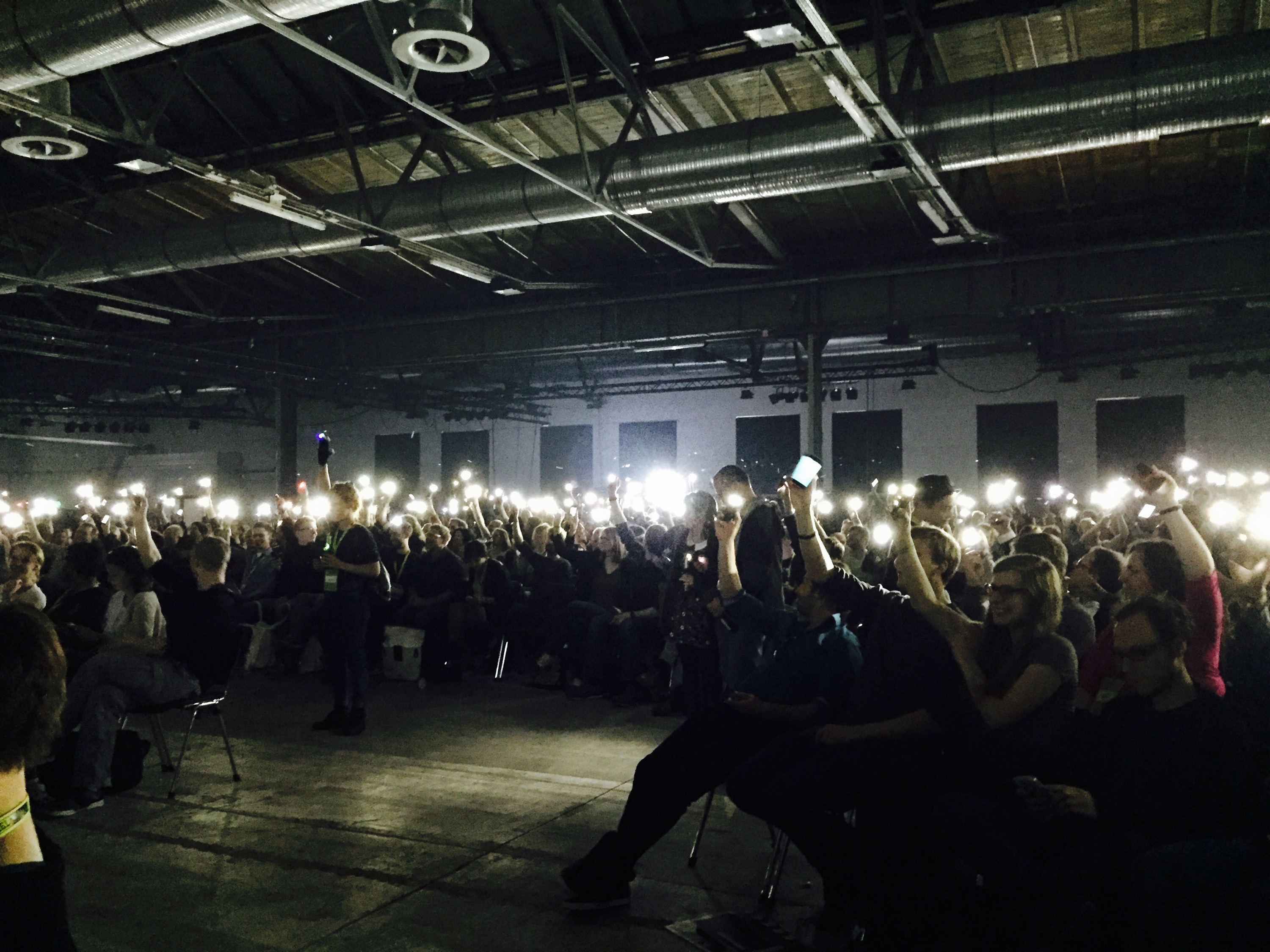 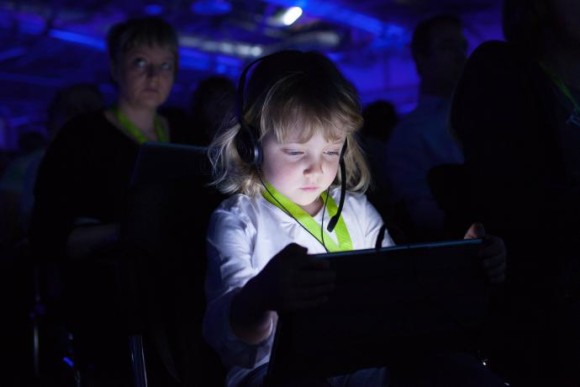 How does the future of education look like? Foto von re:publica/Gregor Fischer unter CC BY-SA 2.0.

At the track re:learn, teachers, techies, kids and grown-ups of different generations and nations discussed the connection of (school) education and technology. The tendency of the sessions was clear: We must learn to trust in new technologies and be more courageous when applying them in the context of learning. A critical position is also desirable so that we may not find ourselves in the midst of a totalitarian educational system. Excessive protection, however, is definitely not the right way.

Alexandra Quiring-Tegeder proved the above in her presentation on kids who program. Instead of constantly thinking about ways to protect kids from the alleged danger of the digital world – police instructions during school lessons such as „Don’t upload any pictures of yourselves on Facebook!“ are the only education – it is more important to communicate the fun of programming and to introduce kids to the topic at an early age. The biggest opponents are above all parents and teachers who themselves show insecurity in dealing with this topic. One way intimidation could be reduced is by the use of easy – and foremost native language – terms. 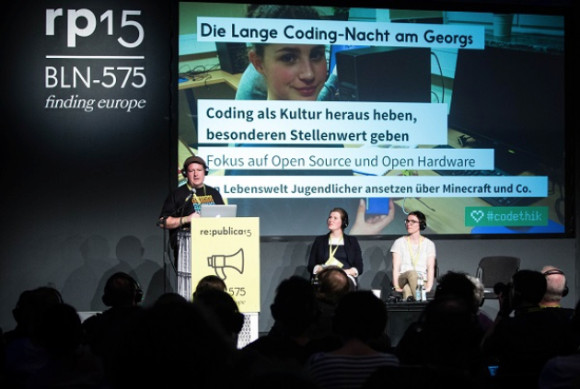 During the session „Code+Ethik= <3“ of Maria Reimer, Paula Glaser and Daniel Seitz it became once again clear that programming will probably become a core capability in shaping the world. The task should be to connect different worlds like school, network societies but also religion and ethics, and to together review the topics of technology and programming which are relevant to society.

Minna Saariketo who is currently obtaining a PhD on the topic of Critical Technology Education criticized that programming and technology are only welcome in the EU as subjects in school when they are economically promising, neglecting the fact that a skilled handling of technology touches on the question of social inclusion. Critical Technology Education aims to not only communicate the implementation of technology but to increase a critical awareness. We are meant to question the status technology has in our daily lives and to breach what has become normal to us. 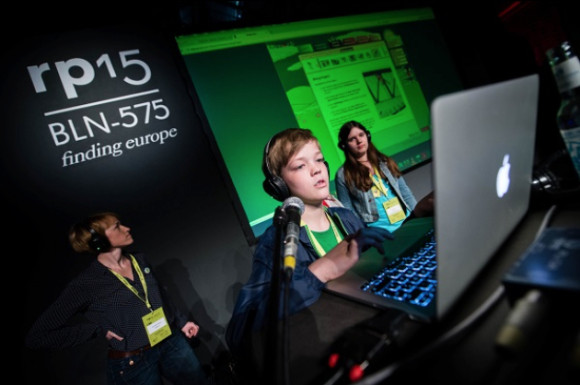 Kids speak for themselves: Lara, Emily and Niclas from FragFinn, a search engine for kids, demonstrated live how they search on the internet and answered the many questions from enthusiastic grown-ups. Foto von re:publica/Gregor Fischer unter CC BY-SA 2.0.

On Stage 1, Michelle Thorne from the Mozilla Foundation spoke about online-alphabetization going from consuming to creating and finally to participating, using the example of Wikipedia. Long before she joined Mozilla, during the early days of the web, she came to realize that she herself would use the internet and become a part of the community – a realization that would change her future path. In today’s network which is shaped by mobile devices, she sees the chance for a user’s own establishment vanish. Especially free services that dominate the internet such as Facebook prevent user’s autonomy. Thorne sees a solution in participative learning; the goal is to once again make shaping the internet possible for all.

One special highlight was the Global Literacy Project, from Ethiopia, presented by Markos Lemma, which was meant to ease the learning process of reading for kids through the help of technology. Without any further explanation, kids were handed out tablets installed with different apps. The fastest kid found the on button after four minutes and within a week the kids were able to basically handle the device. The project demonstrated that the occupation with the device alone makes kids learn. In the long run, hopefully, kids will teach themselves how to read – even without a teacher. There are 198 projects in 40 different countries worldwide trying to fight the problem of illiteracy by means of technology. The electricity needed to charge the tablet, however, remains one of biggest challenges, as is the case with this project. 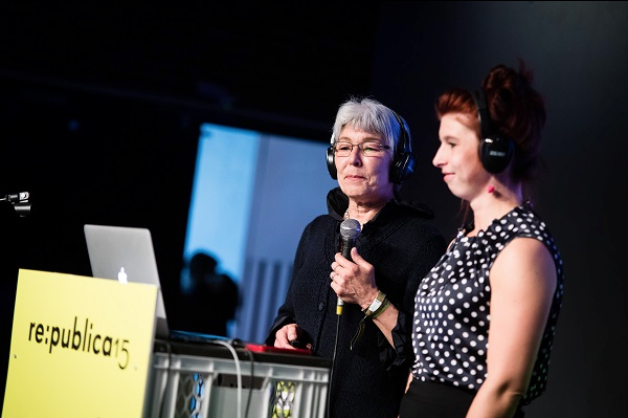 Carline and Ilse Mohr demonstrated how generations can both be active on the internet; Foto von re:publica/Gregor Fischer unter CC BY-SA 2.0.

Concluding the evening, Ilse and Carline Mohr performed their generation-spanning Twitter ping-pong and demonstrated how one family’s use of social media could be patient and humorous. It can be embarrassing, when mom suddenly starts twittering (she has all the childhood pictures!). But it also shows that age does not have to be of any relevance on the internet. For every “offliner”, Ilse and Carline Mohr want a young “onliner” as godparent. Carline was especially thrilled that it was her mom who handed in their session and not she herself.

The track re:learn was curated once again in cooperation with Jöran Muuß-Merholz who opened the track with a satirical review of the years 2015 to 2025. The way to a totalitarian educational system made many people laugh and yet it reminded us that it could easily happen and was definitely meant as a warning signal for society and politics.